As a "good God" you are praised by your subjects,
worshiped by the priests, and you are afraid of the enemies.
You are pharaoh, the one whose name we speak with fear,
and the one whose name we respectfully call God,
the Sovereign, or the King.
You are a sacred being and you have all power in your hands.
You paternally supervise your subjects, their well-being and safety.
You give the direction your people are taking ...

The origin of the first sandals dates back to the 4th millennium BC. At that time, Farara was a ruler with unlimited power over Egypt and was considered a god. After the death of the Pharaoh, his body was mummified and placed in a sarcophagus. His most valuable property was also taken to the tomb of the deceased Pharaoh. Sandals were an integral part of the valuables that Pharaoh was buried with.

Pharaoh's sandals in ancient Egypt were laid on the lid of the deceased pharaoh's coffin and placed above the feet of the mummy to make them available for immediate use in the afterlife. When King Tutankhamun's tomb was discovered, one of the first objects they had pulled out of the grave was a box containing sandals for use in the afterlife. Like many items in the tomb, the sandals were made of precious cedar wood. Their tapes were leather. The wooden soles would be very uncomfortable to wear, and even the flimsy constructions of these sandals confirm that they were probably not meant to be worn in earthly life.

In the context of their original mission, today's apt saying directly says that "These sandals are forever". 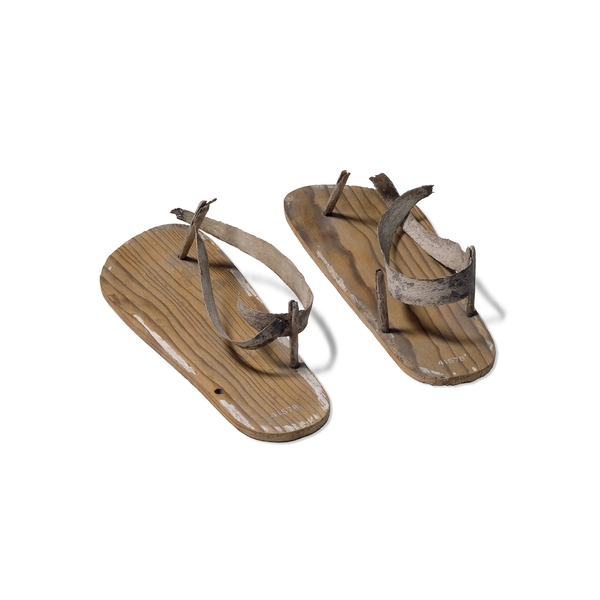 The sandals worn by people from all walks of society in ancient Egypt were mostly made of papyrus, which was plentiful and at the same time cheap, or made of leather and quilted with a papyrus string. In most cases, they consisted of a sole in the shape of a foot and a thong that starts between the thumb and forefinger, leads along the instep and then divides at the foot of the ankle. The two split strap ends are joined on both sides of the sole with another safety strap that is wrapped around the heel. This sandal strap arrangement is the Nile Cross, the Ankh, the ancient Egyptian symbol of eternal life.

The loop at the top of the ankhu is a strap that wraps around the ankle. The side straps show the cross on the symbol, while the upper straps point down the instep and end up connected between the thumb and middle finger. There are two other important Egyptian symbols: the jed, the pillar of stability, the firm connection between heaven and earth, and the stick that gave Egyptian gods the ability to walk in the darkness of matter and avoid all its dangers.

Slaves and poor people in ancient Egypt used to go barefoot mostly, wearing sandals on special occasions. Foot Protection was one of the first things our ancestors produced. They protected their feet from jagged rocks, hot sands, and rugged terrain where they were moving. Among the early Egyptian remains, however, we find some sandals that were beautifully and artistically processed and tied to the leg with braided or woven belts between the first two fingers. Records show that sandals have become a recognized art in the country's history very soon. But this luxury was only for the rich.

To this day, sandals are the most worn type of footwear in many warm countries. Their form and decoration reflect the environment in which they are worn, along with the artistic tastes of the people. In some countries, sandals continue to be as easy to wear as their ancestors have worn since the dawn of history, while in other countries the type of straps and beautiful decorative works reflect the art, progress and prosperity of their owners. 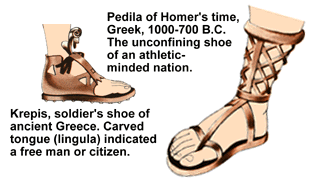 On the left are Egyptian pharaoh sandals

Leather sandals are today the only type of footwear worn most of the year in the southernmost countries of the world, especially for their superior properties: Leather is a unique natural material that cannot be replaced by any artificial processes or materials. The skin is incredibly strong, yet flexible, flexible and adaptable. The longer you wear a leather product, the more it softens and becomes more flexible and flexible. The skin is porous (breathable) and therefore keeps your feet dry. In the touch with your skin, it is especially cool on hot days. 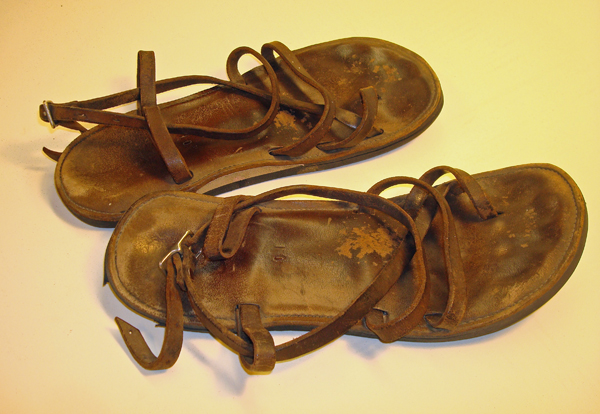 This is how popular sandals look after fifteen years of wear: Growing comfort and longevity

For our sandals, when you try them, you'll find that you can do without them!